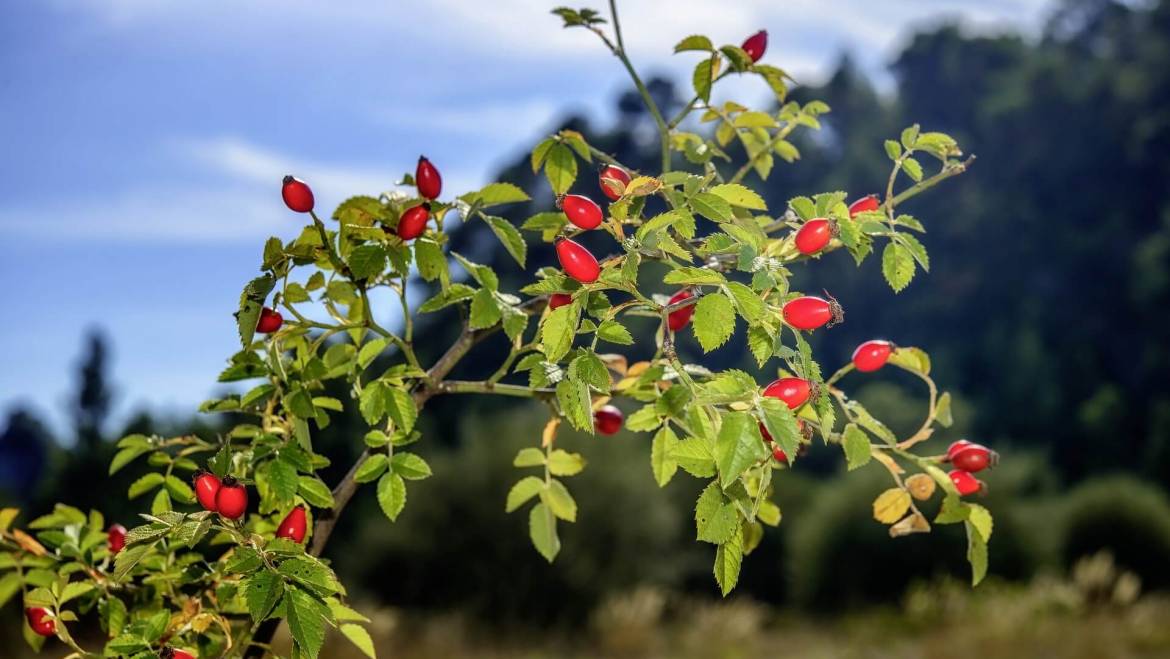 What is Rose hips ?

Rose hips, also known as rose haw or rose hep, are the fruits of the rose plant (rose bush) belonging to Rosa genus in the Rosaceae  family. Rosehip is native to  South America Asia, Europe and north Africa. Rose hip is the accessory fruit which develops from the wild rose plant. Its colour ranges from orange to purple then black as it develops in some species. Rose hip comes in two varieties namely: Rosa gallica and Rosa canina. Rose hip ripens in the late summer through autumn and it is usually harvested either a week after the first frost or later in the fall. The fruits are comprised of 30–35% seeds and 65–70%  pericarp  ( the part of a fruit enclosing the seeds that develops from the wall of the ovary).

Rose hips are usually used for herbal teas, marmalade, pies, jam, jelly, rose hip soup which is a popular meal in Sweden and sometimes wine. Rose hips can also be used to make palinka, a traditional Hungarian fruit brandy which is popular in Hungary, Romania and some counties sharing the Austro-Hungarian history. Rose hips are the main ingredient of a national soft drink which has a fruity taste in Slovenia, cockta. Rose hips were even used as a citrus replacement during the world war Ⅱ due to their high concentration of vitamin c. they helped keep coughs and colds at bay. 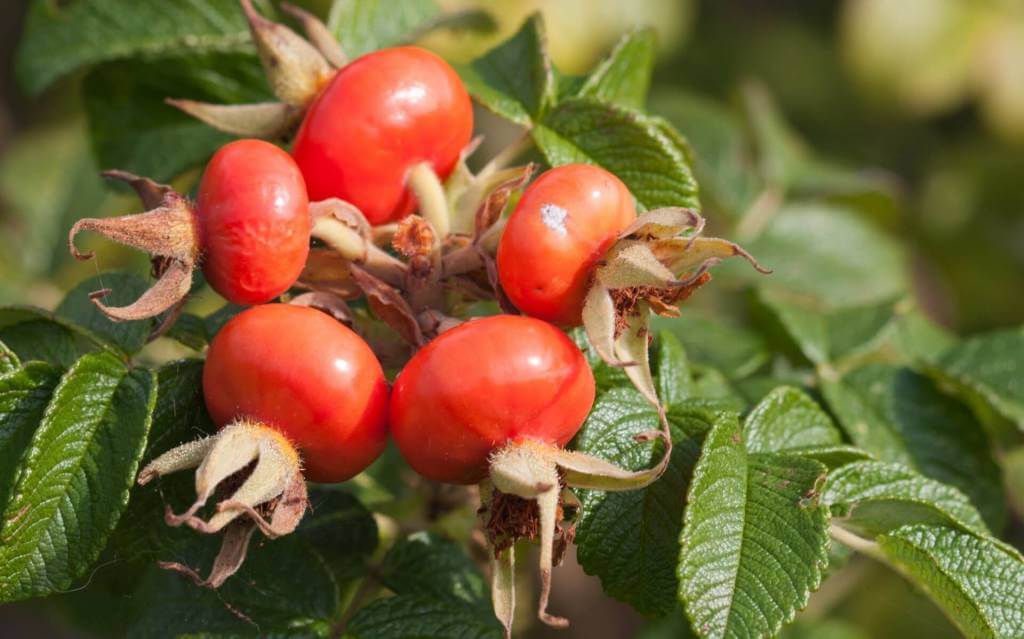 The extraction of Rose hips Oil

Rose hips  are well known to have the highest vitamin C  ( ascorbic acid ) content among horticultural crops, fruits, and vegetables in the range of 880mg/100ml . Rose hips have also  been found to contain appreciable amounts of various bioactive compounds, such as carotenoids, tocopherol (vitamin E) , polyphenols, bioflavonoids (vitamin B), organic acids and  pectin.

Their antioxidant activity is due to their content in polyphenols, vitamins C, E, B and carotenoids  The various acids within rose hips, as well as pectin, cause it to act as a diuretic. Rose hips can help eliminate toxins from the body, as well as excess salts, liquids, and even fat. The astringent quality of rose hips keeps the skin elastic. It can help heal scars and burns, and make the skin look younger and vibrant. The polyphenols  possess a wide spectrum of biochemical activities including antioxidant, antimutagenic, and anti-carcinogenic properties.

Rose hips high concentration of Vitamin C which is known for its skin brightening properties , helps clear out scars, pigmentation and restoring the youthful appearance of the skin and boost the immune system. Vitamin E which is known to calm sensitive skin and hydrate dry skin. It also contains Vitamin A which improves the tone, texture and complexion of the skin, fatty acids which aid in repair and cell regeneration, collagen and elastin. 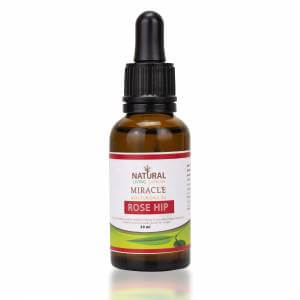 Rose hip oil showed its true potential for skincare around the 1980 when extensive studies showed its healing properties for almost all kinds of skin conditions. It also showed that it was so good for sensitive skin. A study done at the university of Santiago in 1983, shows that rose hip oil could slow down the aging process by minimising wrinkles and fine lines and also it minimises scars.

Tips on how to use rose hip oil. 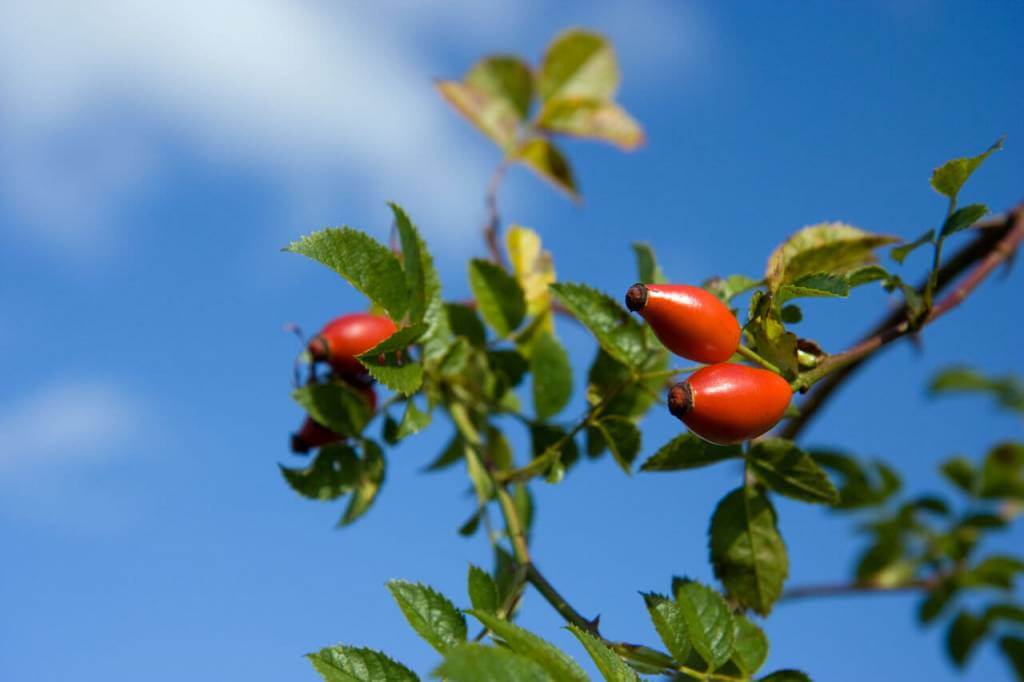 Ways to use rose hip oil for beauty.

Pregnant and lactating mothers are advised to check in with their doctors before attempting to use rose hip oil.

Persons with kidney disorders are not advised to use rose hip oil because of its high vitamin c concentration which can lead to kidney stones.

Persons about to undergo surgery are advised to stop using rose hip oil at least two weeks prior to avoid over bleeding due to rugosin E, a chemical in rose hip oil which slows down blood clotting. Same case should apply to people with bleeding disorders. They should not attempt to use the oil.