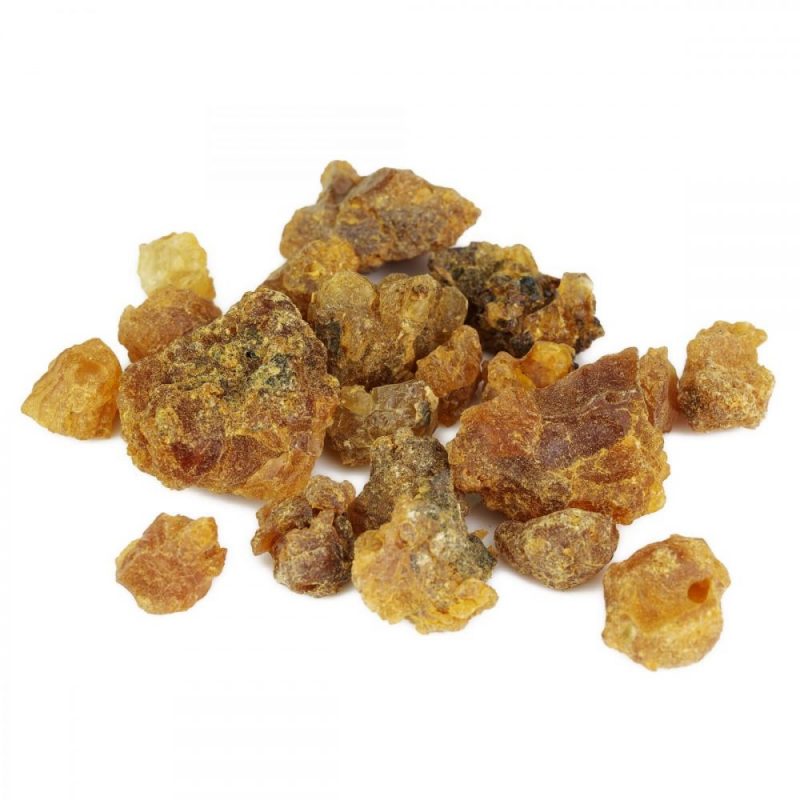 Frankincense is native to the Arabian Peninsula specifically Oman (now Saudi Arabia) and Yemen and also North East Africa (Somalia, Sudan and Egypt) and some parts of India.

The extraction of frankincense

Frankincense is the dried sap of the tree that is harvested by slashing the bark of the tree a process known as stripping or making deep incisions (tapping) in the tree with special knives. The sap from the tree flows out and hardens in the sun. This hardened sap is known as resin and look like irregularly shaped, glossy and transparent stones. The resin is collected and sorted for quality. the larger and lighter the resin, the better the quality.

Frankincense has a warm, earthy, clean, spicy and slightly sweet scent to it.

Frankincense has been mentioned a number of times in the Christian Bible, particularly the Old Testament but many people come to learn of it in the New Testament during the time of the birth of Jesus. Frankincense was one of the three gifts gifted to Jesus by the three wise men alongside gold and myrrh.

The Babylonians and Assyrians valued the frankincense resin for its aroma and the white smoke it has when burned in their sacred places.

The Hebrews burned frankincense in their temples during religious precisions.

Christians and Muslims also used frankincense mixed with other oils top anoint new born babies and other members of the religion entering new spiritual phases of their life.

Uses of frankincense in the ancient time.

Burial precisions. The Greeks, Egyptians and Romans all used frankincense resin as burning incense as an offering to those departed and also to cover the odour of the dead body. The Egyptians used frankincense resin to preserve the bodies of the deceased (embalming process) and cover the odour from decomposition. One particular roman emperor, the famous emperor Nero burned the entire yearly harvest of frankincense at the burial ceremony of his favourite concubine.

Medicine. Frankincense has been used over the years to treat a wide variety of ailments like hypertension, nausea, indigestion, chest coughs. In ayurvedic medicine popular with the Chinese, it was used to treat arthritis, heal wounds and also strengthen the immune system. In Persian medicine, frankincense was used for diabetes.

The cultures in the coast of Arabia used the smoke from burning frankincense to drive away flying insects especially mosquitoes hence protecting them from malaria.

Other uses of frankincense in the ancient times were: clothing scent, toothpaste, deodorant, food and drink flavouring. Egyptians used the soot from burning frankincense as eyeliner.

Frankincense trade in the first century.

The Arabian region became so rich because of the trade of frankincense. In the first century the transport industry was not developed at all and with the popularity that frankincense resin and essential oil had during this period especially in religious ceremonies made it a valuable commodity. It was extremely desired and the demand for it, the difficulty of getting it distributed to the rest of the world was the reason why it was highly priced. Frankincense trade opened the gates for Arabian countries to have so much exposure to other currencies and what the rest of the world had to offer hence the continued prosperity in their economy. The high cost of frankincense led the buyers to believe that Arabia was a land of immense wealth.

The early days when the trade of frankincense was done in large scale, led to the establishment of the city port of Mosha, located on the Arabian coast which was a central processing and distribution hub for frankincense. Frankincense was being transported by boats or barges up river to the city of Shabwah, capital of the pre-islamic empire of Hadramat where it was sorted, graded, taxed and distributed. Camels were a means of transportation overland. Frankincense trade led to the rapid development of ship building industry. The ships were to transport other commodities and frankincense to and from Arabia respectively. The trades routes stretched as far as china and Europe.

The market for frankincense was unlimited. For many families all-round the middle east, it was a necessity in their house just like toothpaste and deodorant is nowadays. Frankincense was distributed to its various markets along two international trade routes: The Incense trade route that connected Arabia, East Africa and India and The Silk Road that passed through Parthia and Asia.

Three innovations came about during the frankincense trade namely:

Frankincense has become one of the most popular aromas today. Its rich history shows that it has had an immense impact on the economy, culture and medicine throughout the Mediterranean and the middle east extending to the rest of the world.