Myrrh’s History And Its Benefits 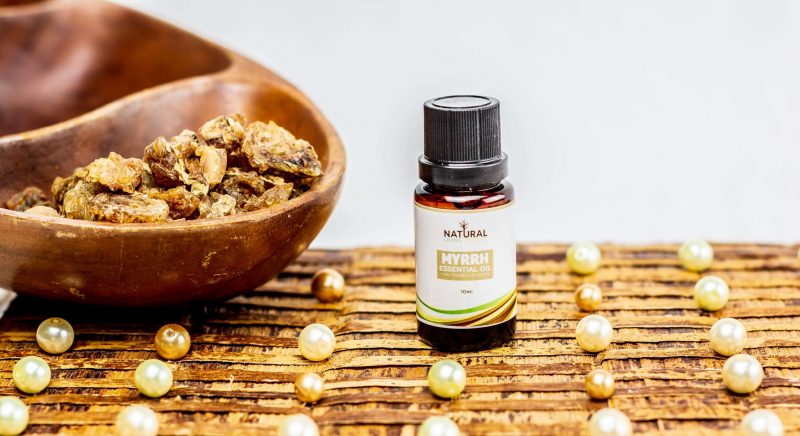 Myrrh is one of the oldest known botanical medicines used by the pharaohs about 5000 years ago.  Myrrh has also been used in different cultures as a source of medicine for treating different diseases. It has extensive references in Chinese and Roman culture. It is widely used as traditional medicines, especially in Rome, India, Babylon, China, and Greece.  IT has been mentioned in the bible numerous times as a medicine, wound dressing and has been closely associated with the health and purification rituals of women.

Myrrh has a range of applications and benefits, e.g. in anti-inflammatory and many infectious diseases treatment, and it is becoming a very popular and valuable alternative medicine. Its extracts have been used to cure wounds, ulcers, and different diseases of the respiratory, urinary tract, arthritis, and gastrointestinal .The benefits of using myrrh in medicine have been proven in many scientific studies.    The studies showed that Commiphora myrrh species produced anti-inflammatory ; analgesic ; antiulcer and antioxidant effects. Commiphora tree also induced antibacterial and antischistosomal activities. The study showed, Commiphora myrrh helps decrease inflammation and controls inflammatory mediators, increases white blood cells counts without harm and helps to sustain white blood cells proliferation and activation during healing. Myrrh is one of the most effective herbal medicines in the world for sore throats, canker sores and gingivitis. In Saudi Arabia, people perceive that Myrrh is more effective than the use of modern medicine, such as chlorhexidine.

Studies have shown Myrrh to contain properties that are beneficial for wound healing and tissue remodelling. This is especially useful if you have injured skin or even if you struggle with pimples that leave scarring (acne). Myrrh could help with acne because it has proven an anti-inflammatory and antimicrobial effect. This could potentially stop pimples from forming. Packed with antioxidants, myrrh is also great for anti-aging, skin rejuvenation.  It encourages new cell growth and is effective in the prevention and treatment of wrinkles. 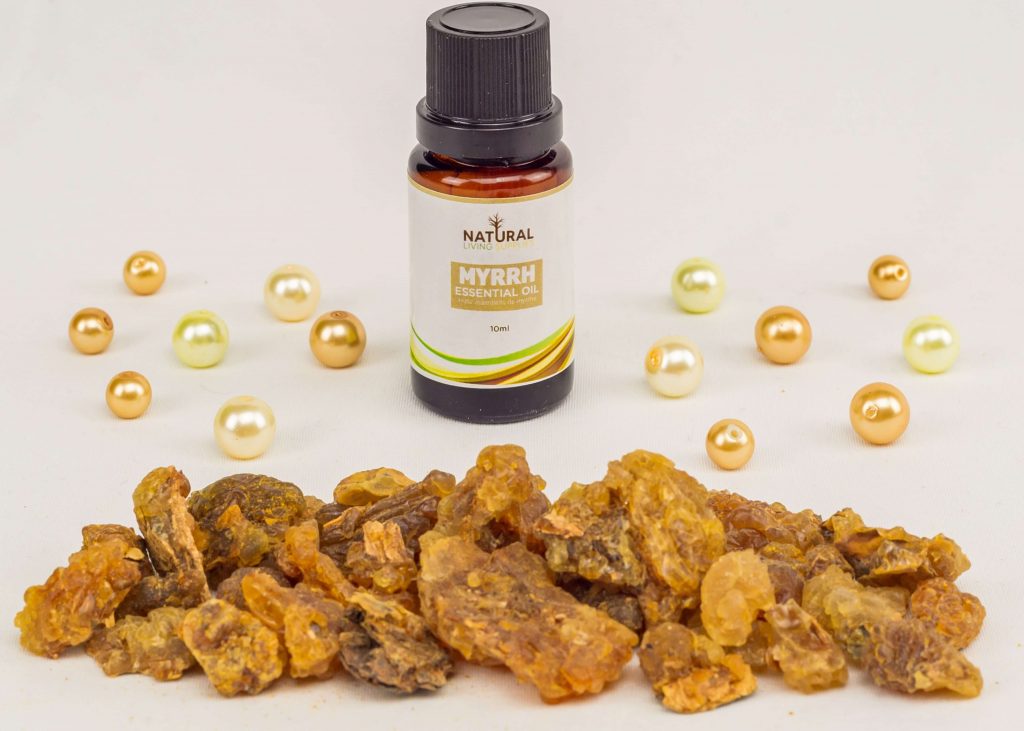 Myrrh is the natural gum or resin that is extracted from a tree from the genus commiphora and species myrrha, hence the scientific name commiphora myrrha. These trees are native to north eastern Africa (Somalia, Ethiopia and Eritrea) and the Arabian Peninsula (Oman and Yemen now Saudi Arabia). Commiphora myrrh is one of the flowering plants in the Burseraceae family. The family of Burseraceae consists of 150 to 200 different species that originate primarily from the arid tropical areas. The Resin is a brownish yellow in color, with aromatic balsamic odour and bitter taste. When combined or mixed with water, it forms an emulsion with different constituents, which include 2% to 8% volatile oil, 23 to 40% resin known as the myrrhin, 40% to 60% gum.

Myrrh is extracted the same way as frankincense resin. Trees are induced to ooze gum resin by making deep slanted incisions in thin periderm. The sap also known as resin is allowed to flow out of the tree and is allowed to harden then scrapped off the tree trunk. The resin looks like tear shaped droplets. Myrrh resin can be used in the dried hardened form or steam distilled to yield essential oil. Hydro distillation is used to produce myrrh essential oil. the process involves mixing water and the resin together. Myrrh essential is different from all other essential oils as it is heavier than water during the separation process.

Myrrh has a scent that is smoky, spicy, sweet, bitter, dry and woody. The sap from myrrh trees has a yellowish colour when cut and viscous consistency before it hardens and turns dark brown.

Myrrh was traded in the Middle East and North Africa over 5000years ago. It was among the items that were in high demand mostly because it was used in religious ceremonies, as medicine and for everyday use like fragrance and oral care. Its trade route reached Jerusalem and Egypt from Oman and Yemen (now Saudi Arabia) following the red sea at the coast of the Arabian Peninsula. The ancient Egyptians imported large amounts of myrrh because of the many uses it had. In ancient Rome, myrrh was priced really high than frankincense.

Uses of Myrrh in the Ancient Times.

Myrrh was one of the three gifts given to baby Jesus when he was born along side frankincense and gold. Myrrh has been mentioned a couple of times in the bible most probably because it was an item that was sacred to the Hebrew people. In the bible we are told that myrrh was used for the purification of women and that it was one of the oils of the holy ointment and more interestingly that myrrh was a fairly sensual perfume. Myrrh was also used as an incense blend when mixed with other substances to be burned in the temples of Jerusalem. Myrrh represented Christ’s suffering from the time he was given the gift. Christ was also offered wine that was mixed with myrrh prior to his crucifixion as written in the book of mark.

In ancient Egypt, myrrh was used alongside frankincense to embalm the bodies of the deceased. The myrrh resin not only preserved the body but also perfumed it.

In the churches today, myrrh is mixed with frankincense to be used in most religious precisions.

In ancient Egypt, myrrh was offered to the goddess Isis to call upon her spirit for assistance.

In ancient times the Chinese used myrrh mainly for medication and it remains part of the medicine till today. It is used by the Chinese for its blood moving powers which is like stimulating the blood especially stagnant blood from the uterus. It is therefore recommended during delayed menses which are definitely not caused by pregnancy. Myrrh was also used in aromatherapy especially for meditative purposes.

Myrrh was also used to calm down their nerves by burning the resin as incense.

Other uses of myrrh in ancient times were: as fragrance, flavouring for food

Did you know that most toothpaste companies use myrrh as one of the ingredient in their toothpaste?

Myrrh has outstanding properties that help with oral health care. Having good oral health means having good digestive health which means great overall health. Many studies have been done to prove that myrrh is the ultimate answer to all the oral health issue that may arise whether it is inflamed or bleeding gums and even mouth ulcers. Myrrh has the ability to relieve toothache pain temporarily. Myrrh can be used as a mouth wash to prevent oral infections. You can make your own herbal mouth wash using myrrh as the main ingredient. All you need are: 1tbsp of powdered myrrh, 1tbsp of cloves, a quarter cup of spearmint leaves and 2 cups of vodka. Combine the ingredient in a jar that has a tight fitting lid and let the ingredients infuse for 4-6 weeks. After the infusion is all done, strain the liquid and transfer to a tight fitting container or dropper bottles for storage. Before using, add 5-10 drops of the liquid to a shot of water and swish in your mouth for 30 second then spit out.

Spirituality  and well being

Myrrh has been used over the years in aromatherapy especially during massages.

How to use myrrh.

There are three ways in which you can use myrrh namely: diffuse the myrrh essential oil by the use of a diffuser in the house or inhale it by adding a few drops of the oil in hot water then inhale the steam, by using it as a cold compress and by applying to the skin topically by mixing it with other carrier oils.

Commiphora myrrha is a sturdy, spiny, glabrous shrub or small tree,usually with a distinct short trunk. The trees grow in parched, rocky hills and they usually grow 3m to 4m tall. The Somali myrrh is different from the Arabian myrrh in that it has white marking while the Arabian ones are more brittle and gummier. The “true”, and most expensive, myrrh is obtained from Commiphora myrrha. (syn. C. malmal). is endemic within the Somali-speaking territory of the Horn of Africa, historically known as the land of Punt (north-eastern Kenya, the Ogaden region in eastern Ethiopia, and Somalia).

Pregnant mothers are not advised to use myrrh without consulting their doctors.

People under diabetes medication should avoid using myrrh due to its hypoglycaemic effects.

People under anticoagulant medication are not advised to use myrrh due to its ‘blood moving’ nature.