Warning: Use of undefined constant ‘CONCATENATE_SCRIPTS’ - assumed '‘CONCATENATE_SCRIPTS’' (this will throw an Error in a future version of PHP) in /home/customer/www/naturallivingsupplies.co.uk/public_html/wp-config.php on line 76
 Olive Oil Skin And Hair Benefits | 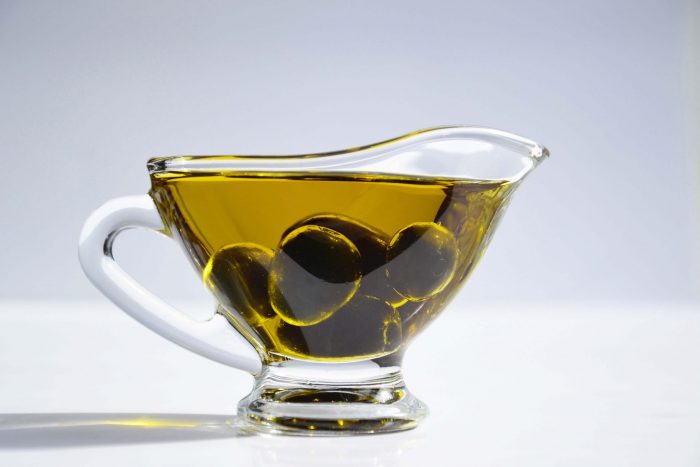 The wonderful benefits of olive oil for skin and hair.

Olive oil is a liquid fat that is obtained from olives, which are fruits from the olive tree (olea europaea). During the stages of maturity, olive fruit changes colour from green to violet and then to black. Olive oil is also known as the liquid gold as named by Homer, the Greek poet, is originated from Asian minor but gained popularity in the Mediterranean region. The Neolithic people in the Mediterranean region collected wild olives back in 8000BC. Wild olive trees were actually domesticated in Asia Minor around 6000BC and also in Levantine and Mesopotamia region around 4000BC and 3000BC respectively. The cultivation of olive trees in the east coast of the Mediterranean started around 1500BC. Olive oil was extracted from the olives first in 6000BC.

A story told by the ancient Greeks of a rivalry between Athena and Poseidon. They both wanted a city to be named after them and were asked by Zeus to gift the city. The most appreciated gift would determine whose name to be chosen for the city. Poseidon used his trident to strike a rock on a cliff and a fountain appeared. He did not care about the details and the water from the fountain was salty as sea water. The water from the fountain could not be used as much so it was not regarded as a good gift. Athens on the other hand planted a seed which grew into an olive tree. This tree would naturally provide for the people by giving them food, firewood, and medicine. Athena became the winner and the city was named Athens after her.

Greek poet Homer in his poems did not forget to mention Greece as the biggest producer of olive oil in the 1500BC. The Greeks actually exported olive trees to their colonies in the west Mediterranean where it was used for trade.

The Spanish and Portuguese explored around the world and brought back food stuffs like tomatoes, potatoes, maize and cocoa. They went ahead to introduce horses and olive trees to the world.

The Romans developed the screw press to extract the oil. This technology is actually still being used in some parts of the world today.

The first olives in south Africa were planted in 1661, at the cape of good hope where a company by the name Dutch East India established a halfway station for its ships.

The olives are harvested from the tree then ground to make a paste. The paste is then spread on fibre disks then stacked in a column on top of each other and placed in a press. Pressure is applied on to the column to separate liquid from the paste. Since the liquid extracted from the paste contains water, it is then separated, the oil and water by centrifugation process. The extraction process brings about different grades of olive oil depending on the processes they will undergo.

The different types of olive oil.

Extra virgin olive oil- this is the highest quality of olive oil with low free acidity and none or little organoleptic defects. This is the oil that is mostly used for salad dressing.

Virgin olive oil- It is produced by the use of mechanical means only with no chemical treatment this oil has a higher free acidity of 2% and has a really strong taste.

Refined olive oil- this is virgin olive oil that has undergone chemical treatments. The strong taste of the virgin olive oil has also been altered by filtration processes. Its free acidity is not more than 0.3%. the oils labelled pure olive oil in the stores are usually refined.

Olive pomace oil- this olive oil has a high smoke point making it perfect for cooking. It is usually obtained by treating the pomace which is the solid substance which remains after the extraction of virgin olive oil from olive pulp with solvents.

Lampante oil- this is poor quality oil which is not fit for human consumption. Lampante means lamp in Italian. This is why it is used as a lamp oil. The oil is for industrial purposes.

Uses of olive in ancient times.

Olive oil has been used in religious rituals by the Christians, the Jewish, the Hebrews and also the Minoans. Olive oil was actually thought to represent wealth during the ancient times by the Minoans.

The olives were used as food, medicine, for cosmetic use, hair and skincare, for soap making and as a lamp fuel.

The Hebrews anointed their kings with a special mixture of myrrh, cinnamon, cassia, kaneh bosem and olive oil as a base.

The Roman emperor gifted their subjects with olive oil during celebrations.

The Egyptians used olive oil alongside beeswax as a cleanser, moisturizer and antibacterial agent.

The extraction of olive oil was recorded in the bible during the time of the exodus when the Israelites getting out of Egypt to Canaan. The process of extracting the oil during this time was by hand squeezing and stored by the priests. It was also mentioned in the bible during the time of Noah when he sent out three doves at seven-day intervals after the flood to see whether the water had receded. The second bird came back to the ark with a branch from an olive tree.

The benefits of olive oil.

Boosts the skin’s tone and complexion.

Slows down the aging process.

Soothes the skin from irritation and as a diaper rash treatment.

As an eye makeup remover

As a lip scrub

As an ear wax remedy

As a shaving cream

As a cuticle conditioner

As a makeup brush cleaner.

Check the bottle which stores the oil. Most quality olive oils are stored in dark bottles to prevent too much light exposure of light on the oil.

Check the label. A label can read extra virgin olive oil but the product isn’t. a reputable manufacturer of olive oil can add some details like the farm the olive oil is produced, the variety of olives used etc.

Did you know that Japan was the highest importer of olive oil in the year 2000 because the Japanese believed in the skin, hair and health benefits?